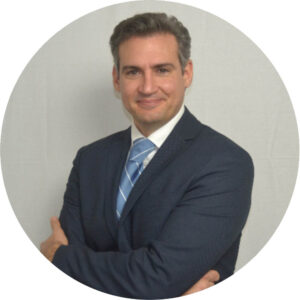 Are you looking for a place to sleep in bologna? Do not miss the opportunity, book your room in our bed and breakfast

The Most famous Tavern in Bologna: Osteria dell’Orsa

Did you know that the Osteria dell’Orsa is the most famous tavern in Bologna? Discover with us its history and its menu!

The history of Osteria dell’Orsa

The Osteria dell’Orsa was founded in 1979 in St. Mentana 1, in the historic center of Bologna, in the university area. It is a location frequented by many students due to the position and it can be noisy at times.

Its foundation is due to Maurizio Sicuro who, together with his brother Giuseppe and his friend Franco Bertocchi, took over the former “Dal Francese” sandwich shop to make it the current Osteria dell’Orsa.

It is considered one of the typical taverns of Bologna also given to its long history: thanks to the Marxist thought of the owners, the tavern immediately became a meeting place for communists and punks. What not everyone knows is that this restaurant has a basement where, for many years, there were numerous concerts: it started with punk and then moved on to jazz.

With the murder of Marco Biagi in 2002, a labor lawyer and academic, by the Red Brigades, Maurizio together with his partners decided to focus more on catering, leaving musical evenings.

But why is it called Osteria dell’Orsa?

The name derives from a book of Toni Negri, philosopher, political scientist, activist adhering to worker Marxism, which Maurizio read before opening the restaurant. In this book, the author compares the movement of the seventies to a bear, that is a meek animal that becomes ferocious to defend the little ones.

What to see near the Osteria dell’Orsa

Thanks to its central location, the Osteria dell’Orsa is located just a few minutes from many symbolic places of the city of Bologna. Find out with us what they are!

The Garisenda and Asinelli, the Two Towers, are one of the symbols of the city. They both date back to around the year 1000 and hide numerous secrets within them. The Osteria dell’Orsa is only a 5-minute walk (450 m) from the towers, so don ot miss them!

The Asinelli Tower is part of one of the seven secrets of the city, just like the fountain of Neptune: real the others in our article A Journey Through the Seven Secrets of Bologna. Moreover, the Two Towers are located int he heart of the city: not so far from them you can reach Piazza Maggiore, the main square, where you can admire the Basilica di San Petronio. These Two monuments are also very close to the ancient jewish ghetto of Bologna!

Read also: Five things not to be missed in Bologna

The University of Bologna

The fame of the University of Bologna annually attracts numerous students and famous minds from all over the world. Its birth dates back to 1088 AD. and the main teaching was law.

Starting from the osteria and walking for about 700 m towards St. Zamboni, you arrive in front of the first seat of the oldest University of the Western world.

Did you know that the Univerisity of Bologna has various buildings among the whole city? Such as the Complex of San Giovanni in Monte and the old Botanical Garden, which for a long time was in the actual Salaborsa Library, now in Irnerio street 42.

Bologna has a long history in the musical field: famous musicians such as Lucio Dalla were born here and it is also home to numerous music museums.

The Tagliavini Collection includes numerous ancient musical instruments and is located in the former Church of San Colombano and Madonna dell’Orazione in St. Parigi 5, 700 m from the Osteria dell’Orsa.

Here it is also possible to participate in numerous initiatives for music lovers. Read also: Bologna: city of music

The Basilica of Santo Stefano

Did you know that near the Osteria dell’Orsa, just a 10-minute walk away, there is also the Basilica of Santo Stefano? The latter is also called by the Bolognese “Seven Churches” as there were once other buildings that together formed seven churches.

Read also: Everything you don’t know about the Basilica of Santo Stefano in Bologna

A curiosity that few know is that of the presence of a crypt under the Basilica: the crypt of SS. Vitale e Agricola dates back to the 11th century AD. but it was only discovered in the late 1800s.

Read also: Underground Bologna: a journey into the four crypts

The menu of Osteria dell’Orsa

The motto of the Osteria dell’Orsa is “better quality than quantity”: for this reason you will find a reduced menu, which changes daily. However, the typical dishes of the culinary tradition are always present.

Among the first courses you will find handmade tagliatelle, tortelli and lasagna from the Laboratorio dell’Orsa; among the main courses, the famous Bolognese cutlet is never missing, and as appetizers the Bolognese spianate, tigelle, crescentine and mixed cold cuts, including the beloved mortadella!

The Osteria dell’Orsa also offers many typical wines of the area.

A full meal costs around 20€ per person.

Its location creates a healthy competition between the osteria and the numerous shops near it: the Quadrilatero is in fact a well-known area visited by tourists every year. Its creation dates back to the Middle Ages, but find out more in The Quadrilatero market in Bologna.

For more information about the typical restaurants of the city, read our guide The five Best Taverns in Bologna: from the 15th century to now! In addiction, do not forget the old tradition about fresh pasta; there are many places that still now pass on this excellent art with their sfogline!

This second tavern looks a lot like the first, but with a more modern tone. The menu is also very similar, except for the introduction of vegan dishes and some fish-based dishes, a choice made to meet everyone’s needs.

There are also numerous 0 km wines (over 20 labels) from the Emilian area.

Speaking of the city walls: discover their history and their transformations among time, in our Journey to Discover the Walls of Bologna. 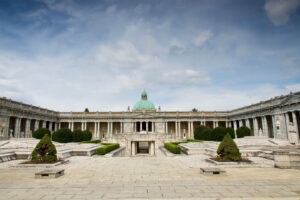 The Certosa of Bologna: a museum cemetery

The Certosa of Bologna is a unique cementery among all the graveyards of the modern necropolis of the western world. This cemetery 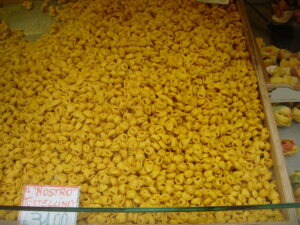 Bologna is the home of tortellini, tagliatelle, lasagne and balanzoni. Discover with us the art of fresh pasta: the magic union of 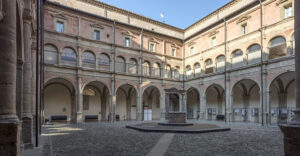 San Giovanni in Monte in Bologna: a hill with a long history

San Giovanni in Monte in Bologna is one of the places that most experienced historical changes during the centuries. Now, it is